As a Shadow Master, you have the power to control them. To survive, your monsters must fight the monsters of other Shadow Masters around the world.

Join the hidden battle raging across the globe. Travel to major cities and clash with five secret factions, capturing new monsters and collecting rare artifacts in each vibrant location. Carefully balance your monsters’ abilities to craft the ultimate crew, then unleash them on teams of opponents in a strategic game of planning, timing, and skill. As you level up and evolve your monsters, you’ll face greater and deadlier foes. Join the war or be destroyed.

The soundtrack is available here:

Follow this game on the following networks for news, updates, tips, tricks and more!

In a world overrun with zombies, how far will you go to survive?… 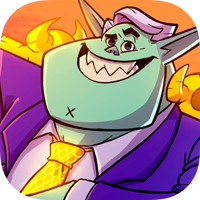 Wanted: Gold Production Manager. Must have an evil streak. Apply within.…